I became Artistic Director of this conceptual art project with James Geurts in 2012. The collaboration proposes the first embassy for a shared entity, water, reflecting on the importance of water to the development of societies and cultural imagination. My involvement in Embassy is informed by my past work on the Nomad Territories project, founded in Quebec in the late 1990s. This too involved the appropriation of institutional platforms and perspectives for the purposes of artistic experimentation and cultural exploration.

Embassy evolves with successive iterations, operating as a residency, a consultancy, a nomadic reality, a curatorial hub, a reimagining of water infrastructure, a series of water-inspired art works, and an interdisciplinary conversation. It has involved projects for public spaces and arts organisations in the Middle East, Canada, Holland and Australia, including the European Capital of Culture 2018. In November 2015, we created an Embassy for Water Flux Passport, featuring stamps from past projects and a current stamp for a project at Paddington Reservoir in Sydney.

The passport action was part of a group exhibition and programme of events organised in collaboration with Sydney’s National Institute for Experimental Arts (UNSW Art & Design) and the City of Sydney’s Paddington Reservoir. This historic site was once a key part of Sydney’s water infrastructure, accepting water from the Botany Swamps pumping station to distribute throughout the city from 1866 to 1899. Following its closure, the site fell into disrepair, before being converted into a sunken garden by the City in 2006. Embassy planned a video installation in the Western Chambers of the Reservoir, with work by artists from Australia and overseas, including James  Geurts, Ynin Shillo, Craig Walsh, David Bowen, Neville Gabie, Anna Mcleod, Christie Pearson, Kim Taegon and Josh Wodak.

At Ivan Dougherty Gallery, on the campus of UNSW Art & Design, a group exhibition featured works by Sydney and Melbourne-based artists, and the issuing of the first wave of Flux Passports. These playfully, and critically, conferred on the holder the status of ‘World Water Citizen’. Kelly Doley, presented a participatory performance from her series Alternative Futures, Past and Present, while Bruce Mowson invited audience members to experiment with the relationship of forces between their body and water in his kinetic sculpture Swing. Also in the gallery, a Water Archive by Bacon and Geurts large-scale Drawing In, Drawing Out: Sydney Harbour. Outside the gallery, throughout the evening Brooke Louttit and Julie Louise Bacon transformed the amphitheatre design of a courtyard into a circular system of water chutes in a restaging of the Fluxus durational action Zyklus for Water Pails. 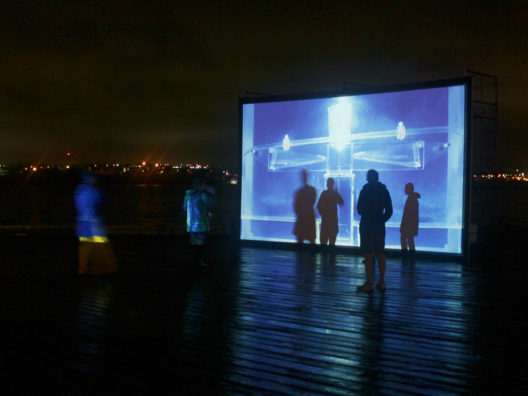